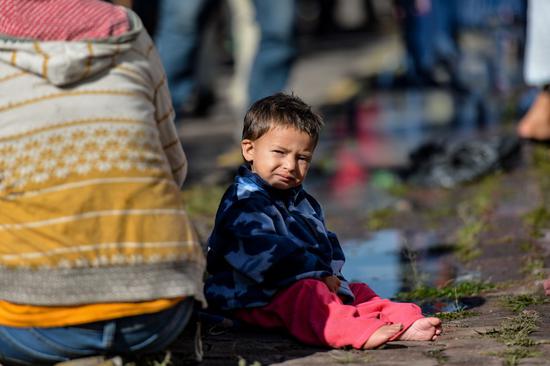 A child sits in a temporary transit center for migrants from Central America in Mexico City, capital of Mexico, Nov. 5, 2018. (Xinhua/Xin Yuewei)

Lawyers appointed by a federal judge say they have yet to find the parents of 545 children who were separated from their families at the U.S.-Mexico border between 2017 and 2018, according to a filing from the American Civil Liberties Union (ACLU) on Tuesday.

The Trump administration, when instituted a "zero tolerance" policy in 2018 that separated migrant children and parents at the southern U.S. border, began separating families in 2017 along some portions of the border under a pilot program, NBC News reported.

Unlike the 2,800 families separated under zero tolerance in 2018, most of whom remained in custody when zero tolerance was ended by executive order, many of the more than 1,000 parents separated from their children under the pilot program had already been deported before a federal judge in California ordered they be found, according to the NBC report.

"It is critical to find out as much as possible about who was responsible for this horrific practice while not losing sight of the fact that hundreds of families have still not been found and remain separated," said Lee Gelernt, deputy director of the ACLU Immigrants' Rights Project.

The ACLU, along with some other organizations, is part of a court-appointed "steering committee" that aims to identify and reunite these families separated by the Trump administration.

Most popular in 24h