Global investors are stepping up their bets on China 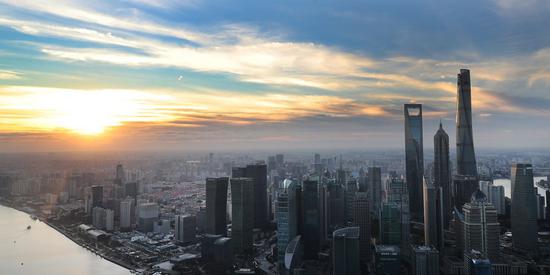 Photo taken on Nov. 1, 2018 from the Baiyulan Plaza shows view of the Lujiazui area in Pudong of Shanghai, east China. (Xinhua/Fang Zhe)

Global investors are increasing their stakes in Asia, particularly in China, despite the COVID-19 pandemic and geopolitical tensions still haunting the region.

Edinburgh-based investment partnership Baillie Gifford announced it is increasing investments in China with the expansion of its presence in Shanghai, where it holds its first overseas office with the ability to conduct local research, CNBC reported.

"We believe that China's business model, innovation, has great strength, and will attract global development, so we think the Chinese market is a great opportunity," the company's head of China Amy Wang told CNBC.

Wang said Baillie Gifford plans to tap more Chinese investors through onshore funds, adding that the government, banks and credit institutions in China are already clients, and the firm is in talks with insurers to become investors as well.

According to CNBC, the firm has about 55 billion U.S. dollars, or about 17 percent of assets under management, invested in more than 100 Chinese companies. The firm also participated in a Series C investment round for Chongqing Jiangxiaobai Liquor led by China Renaissance.

China was already seeing major global investors like Baillie Gifford engaging before the pandemic, thanks to its continuous efforts to further reform and open up its market.

As a country leading in the track of recovery amid the COVID-19 attacks worldwide, China is predicted by many to see a relatively optimistic economic outlook.

The latest data shows that foreign direct investment (FDI) into the Chinese mainland, in actual use, expanded 18.7 percent year on year to 84.13 billion yuan (about 12.3 billion U.S. dollars) in August, marking the fifth consecutive month for the country to witness positive growth in FDI.

Most popular in 24h